Incense and connecting to the knowledge of our ancestors 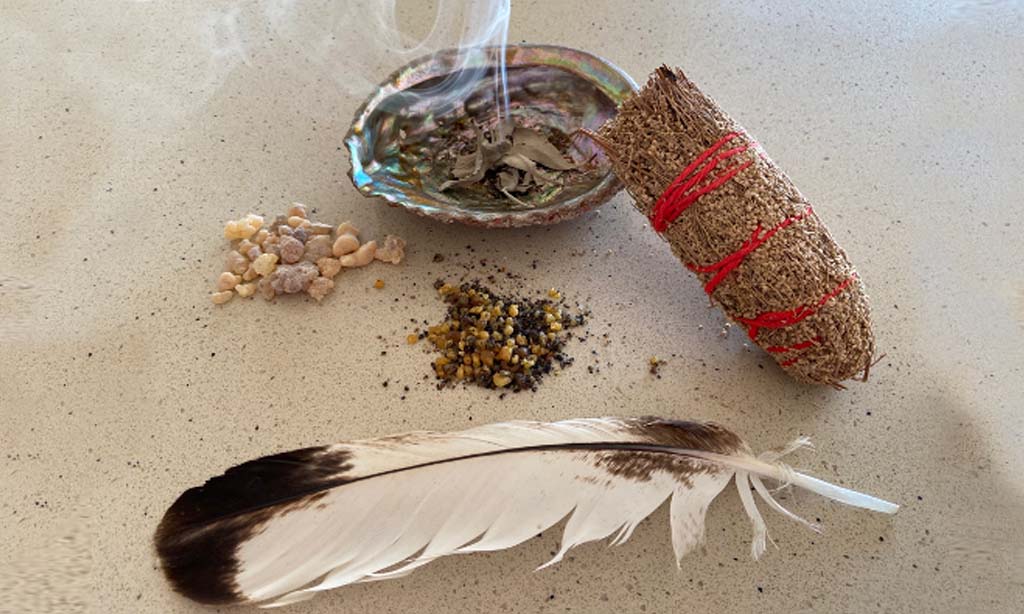 Historically, all cultures have a tradition of using plants and plant material to create incense and perfumes both for ceremonial use and to create a more pleasing atmosphere. Our very early ancestors would have gathered around a ceremonial fire, breathing in the “holy smoke” from woods and resins. Indeed the modern word perfume comes from the latin words per fumen meaning “through the smoke”.

White sage “smudging” is still widely practised today to cleanse the atmosphere of a space in order to sharpen our senses and open us up to connect to spirit.

Native american tradition would include the use of wild sage, cedar, sweet grass etc in the form of dried herbs which would then be used as incense for special ceremonies. The idea being that the scent would transport them from the mundane connecting to the spiritual realm.

Science is now catching up with this ancestral knowledge
Science is catching up with what our ancestors innately understood and is now proving the efficacy of many of these forms of incense in cleansing and uplifting our environments. Studies have recently found that negative ions are released when white sage is burned. This is where a negative is actually positive for us; negative ions are molecules which have been found to effect biochemical reactions within our bodies related to boosting energy, enhancing our mood and even boosting serotonin levels. The most important benefit of negative ions is that they clear the air of airborne allergens such as pollen, mould spores, bacteria and viruses. Negative ions perform this function by attaching themselves to positively charged particles in large numbers and negatively charging those particles.

In the 2007 study titled “Medicinal smoke reduces airborne bacteria,” a reduction of 94% of airborne bacteria within 60 minutes within a closed room with the use of plant smoke proved that smudging with White Sage may be one of the most powerful antiseptic air purifiers ever used. By looking at the Latin name for Sage: salvia, translating simply as ‘healing plant,’ we find that even the various European species hold a very potent power to heal. Salvia is derived from the term salvus, meaning ‘healthy.’ Evan Sylliaasen, The Northwest School of Aromatic Medicine.

Ethical harvesting
White sage has become so over harvested now that it is in fact under serious threat, this combined with wildfires and drought in California in recent years has brought it to an almost endangered status. Therefore sustainable harvesting or even substitution with a less endangered herb or incense must be considered. Alternatively as Evan suggests, why not source some white sage seeds and grow your own herb for this purpose.

Smudging with plant material to create sacred space is common to many traditions around the world. The Tibetans often used Juniper for this purpose, to cleanse and protect their energy. In Japan, incense has been used since the 5th century AD when Buddhism became established there. Incense was used in offerings to the Buddha and in spiritual ceremonies and rituals. They commonly used aloeswood, clove camphor, cinnamon and sandalwood among others. (“Listening to incense course” Evan Sylliaasen.)

Where to source incense – quality and purity is important.
When choosing incense for your own home, always choose pure and, where possible, organic varieties. There are many excellent resources for pure incense online, good health stores will carry pure and natural incense sticks or you can even grow and dry your own herbs to use for this purpose.Incense comes in many forms including dried leaves/flowers, resins and incense sticks. Highly processed and synthetic incense will simply introduce toxic chemicals to your environment which are neither good for you nor the environment at large.